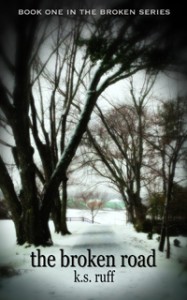 The Broken Road
(BOOK ONE IN THE BROKEN SERIES)

Montana girl Kristine Stone was strong enough to break out of an abusive marriage, but is she strong enough for the road that lies ahead? For the first time in her life, Kristine finds she is able to control the direction her life takes. Haunted by her ex-husband and a newly acquired stalker, she decides to leave Montana to work in the US Senate. Kristine issues a moratorium on dating the moment she decides to move to DC. This does little to deter Kadyn Rand, the Air Force Captain, who threatens to tear down every wall she’s ever built. Still, someone from her dark past refuses to be ignored, and Kristine finds herself in yet another fight for her life. Air Force Captain Kadyn Rand is too stoic to be swept away by much of anything, but a vulnerable woman from Montana manages to do just that when she finds herself alone and in danger in DC. Kadyn tries to earn Kristine’s love and her trust, but he soon learns it will take much more than that to save her from her past.

How many times can one woman be abducted? That’s the question burning Kristine Stone when she finds herself staring down a dark and dangerous man from her past. When she refuses to leave with him, he forces her hand by threatening to kill the man she loves, along with thousands of others. Kristine fears his terrorist connections will enable him to make good on this threat, so she complies. She thinks she has it all figured out. If she takes the path of least resistance and does everything this man asks, he will eventually tire of her and let her go. Despite this well intentioned plan, Kristine discovers just how seductive this man can be. She is forced to choose between the love of two men and stands to lose everything in the end. 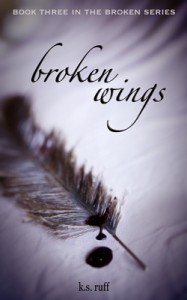 Just when she thinks she’s gotten her life pieced back together, Kristine Stone wakes to a searing kiss from someone rather unexpected. This dark angel is determined to win her heart, and he refuses to play fair. This doesn’t sit well with her former lover, Kadyn Rand, who yanks the rug out from under her when he confesses that he wants to be more than just friends.  She refuses to choose and gets roped into an impossible dating agreement, that she is quite certain will land her a one way ticket to hell. Amidst all this insanity, a new friend presents an exciting opportunity to work for an international organization devoted to peace-building. When Kristine joins her friend in Sevastopol to train university students in conflict resolution, she finds herself accused of being a spy by a security agency deeply entrenched in the former KGB. A chance run-in with the Russian Mafia proves beneficial as three men from her past are forced to work together in an effort to save her life. 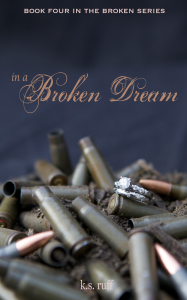 In A Broken Dream
(BOOK FOUR IN THE BROKEN SERIES)

One long string of broken dreams… that’s how Kristine Stone views her life.  After a deadly altercation between the SVR and the Russian Mafia claims the life of someone she loves, Kri returns to Virginia feeling hopeless and lost. She discovers her best friend, Cenia, has become engaged. Cenia asks Kri to be her maid of honor. Kadyn is asked to serve as the best man, and the two former lovers are thrown together once more. Maxim makes an unexpected appearance, and Rafael is on a mission to win Kri’s heart once and for all. A brief trip into Mexico threatens to derail everyone’s plans when Cenia and Kri find themselves stuck in the middle of a gunfight between opposing drug cartels. Kri faces yet another abduction and is left questioning whether her life will ever be anything more than a broken dream.

Broken Together
(BOOK FIVE IN THE BROKEN SERIES) 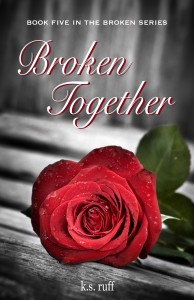 Rafael whisks Kristine off to Portugal, where an old colleague presents a job opportunity that proves impossible to resist. Rafael decides to move to Portugal so he can end an international pedophile ring he’s longed to destroy since he first worked the case for the Portuguese Police Special Operations Group. Kristine’s certain their relationship is strong enough to endure the six month separation so she returns to Virginia to finish her degree. Oni moves to Virginia, Maxim calls in his favor, and Kristine willingly returns to Ukraine. Kristine’s life is threatened when she returns to the United States. Instead of eliminating the threat, she decides to sacrifice her life for someone she’s never even met. Kristine takes every single one of her friends on this courageous journey of faith, hope and love.

STAY UP TO DATE WITH THE BROKEN SERIES ON…